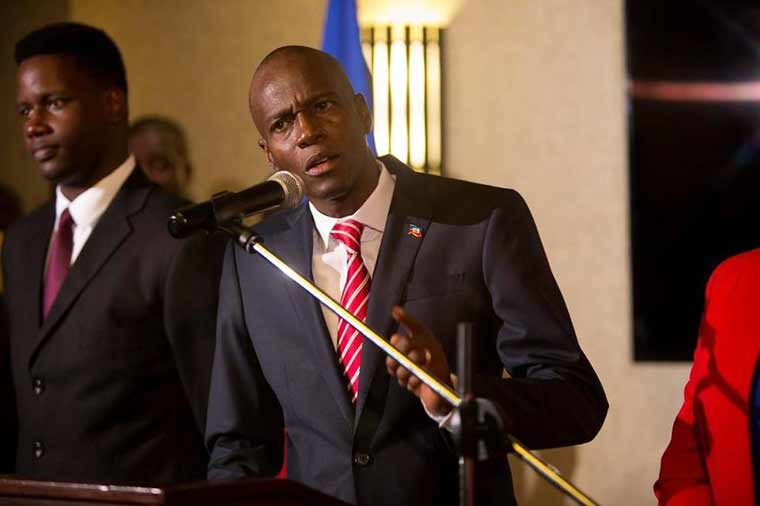 A Haitian judge is investigating a report by the government’s financial crimes unit indicating that incoming President Jovenel Moïse may have laundered millions of dollars through at least one local bank, and a separate claim that he received special treatment to obtain thousands of dollars in business loans.

Just two weeks before Moïse, 48, is set to be sworn in on Feb. 7, Judge Brédy Fabien has begun hearing testimony “that it is possible Mr. Jovenel Moïse manipulated funds that have nothing to do with his businesses,” according to a 68-page report by Haiti’s Central Financial Intelligence Unit.

The investigation was initiated in 2013 after a bank contacted the financial crimes unit about suspicious transactions, said Sonel Jean-François, head of the unit that investigates money laundering. The administrative report was first leaked in the fall during Haiti’s presidential campaign.

Moïse, a banana farmer and auto parts dealer who campaigned on rooting out corruption and strengthening Haitian government watchdogs like the financial crimes unit, has repeatedly dismissed the money-laundering suspicions.

“This is purely a political battle, and it has nothing to do with the truth,” he told the Miami Herald Tuesday, in between campaign stops for Sunday’s countrywide local elections.

According to two sources close to the probe, the judge is investigating information supplied by the financial crimes unit, which looked at 14 bank accounts held by Moïse, his wife and his businesses.

The investigation, covering 2007 through 2013, is focused on the pattern of transactions, including large daily deposits that “exceeded the threshold for declaring the source of funds.” The report also notes the unusual pattern of vehicle purchases by Moïse — 45 vehicles, most of them new, registered in his name.

Moïse has said the vehicles were part of a water-distribution business that he started. He said the frequent deposits were for school fees and other personal expenses.

The judge is also considering a second set of allegations involving Moïse’s finances, this one by the government’s Unit for the Fight against Corruption. Two loans — one for $600,000 and another for 19 million Haitian gourdes, or about $436,064 at the time — were among several problematic transactions flagged in a 47-page report about state-owned Haitian Popular Bank lending practices.

The confidential report, seen by the Herald, notes that both of Moïse’s loans are delinquent and were quickly approved without following normal procedures and guarantees. It notes that the loans were approved even before Moïse had completed the applications and before the bank had received the paperwork.

Danton Léger, the public prosecutor, confirmed that he had received a letter from the anti-corruption unit about the Haitian Popular Bank probe. He said he forwarded the investigation to the judge for further investigation.

Moïse disputes the anti-corruption unit’s findings. He said he only had one loan for $450,000, and has kept up with the payments. He said the second amount — 19 million gourdes — “is the same money that I borrowed that I refinanced and have until 2018 to pay off.”

The judge’s investigation is being conducted in secret, similar to the workings of a grand jury in the United States. But lawyers for the head of one of the banks in question, the National Bank of Credit, confirmed to the local press that their client had testified before the judge.

The probe began under former President Michel Martelly’s government, Jean-François said. That was long before Moïse registered as a candidate in the country’s tumultuous high-stakes presidential election, which had to be rerun last year after accusations of fraud.

The allegations about the president-elect’s finances are raising concerns about Haiti’s ability to root out corruption at a time when U.S. commercial banks, fearing hefty fines over money laundering, have started cutting ties with corresponding Caribbean banks. The move has made banking transactions difficult for Haitian banks.

“We would like for this dossier to be clarified before the president is sworn in, to protect the country,” said Sen. Evalière Beauplan, who represents Moïse’s home territory in the Northwest region of the country. “We risk spending the next five years with the country not getting any kind of [foreign] assistance. ... If they believe the president is involved in money laundering, they will say we are a corrupt state and they cannot lend us any money.”

Beauplan is among four opposition senators who in a letter to the head of the Senate last week demanded further investigation of the government report ahead of Moïse’s swearing-in as Haiti’s 58th president.

Moïse addressed some of the allegations during the campaign. At an event in September, he said that he had taken out two loans totaling $1.2 million in 2009 to start a business selling potable water in trucks. He named an associate — Samosa, Sada-Moïse, S.A. — but offered no other details about the company. He said the loan amount included $850,000 from the National Credit Bank, where Moïse has four accounts.

“The recorded deposit transactions in this account are made in cash and are very significant,” the report said. “We saw many daily deposits of very large amounts, exceeding the threshold required for the declaration of the source of funds. We cannot justify the origin of these amounts because we do not yet have any supporting documents.”

Moïse said at the September campaign event that the account was a personal one held by him and his wife. He added that the funds were in Haitian gourdes, not U.S. dollars, meaning the amount was about $128,000 in 2013, far lower than the $5.55 million figure used by investigators.

And the unusual number of vehicles he purchased, Moïse said, were for business. He said he and his associate, Samosa, “bought 24 trucks so we could sell water. ... I bought $660,000 worth of vehicles in one day.”

He had paid off all of his debts, he said, and didn’t owe anyone.

But that statement contradicts what he said last week. At a press conference last Wednesday after a visit to the neighboring Dominican Republic, Moïse told reporters that he did have a dealership loan for the vehicles. He said he bought 19 vehicles through “internal credit” at the dealer, and 24 vehicles through a bank loan. The vehicles, he now said, were for a water distribution factory that he and “an associate” built in 2009.

A source close to Moïse’s dealings said the factory in question, JOMAR DISTRIBUTEUR S.A., was actually built in 2002-2003.

But in the Herald interview Tuesday, Moïse insisted that factory is not the same one that he opened in 2009.

The investigation has taken on political overtones. Jean-François, the executive director of the financial crimes unit, has been accused by Moïse’s political allies of engaging in a political witch hunt.

Jean-François insists the investigation began three years before he took the job as the head of the unit.

“It was already prepared and all I had to do was submit it,” he said. “It’s not us who invented the report or started the investigation.”

He also said the debate about whether the money was held in gourdes or U.S. dollars is irrelevant because “there are other activities” in the accounts that raise suspicions.

Léger, the public prosecutor, said he sent the financial crimes report in September to be assigned to an investigative judge, but the case has taken this long because Moïse was a presidential candidate and entitled to some immunity from prosecution under Haitian law.

Under Haiti’s recently passed money-laundering law, the penalty is three to 15 years in prison and a hefty fine.

Léger said he’s waiting for the judge to tell him if there is enough evidence for prosecution. He hopes he receives the judge’s report before Feb. 7 when Moïse is set to become president.