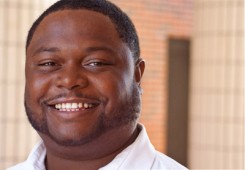 Valensky Sylvain has been a performer since the age of five. He began performing in Brooklyn, New York and has expanded his acting career all over the United States. His love of the arts is only surpassed by his love of God. He has a great knack for networking and has been doing so for over 20 years.Five years ago he took a shot at film after working in theater the majority of his life, and fell in love with it. He since has been gathering together like-minded individuals to further their dreams and aspirations in the film/acting business, while working on starting his own film company. He is the founder and coordinator of Dark Elf Films and dedicates much time to developing his craft.Some film projects Sylvain has worked on are Hoodoo for Voodoo, Zombies! Zombies! Zombies!, Contract Killers, The Tenant, Ninjas vs Pirates among others. He has recently been at the forefront of the Dark Elf Cinematic Haiku, which is a compilation of short stories of various genres: hard romance, serial malice and modern mythologies. He is also producing, acting and casting in the Viva Humanity web series, which is a post-apocalyptic zombie revolution.