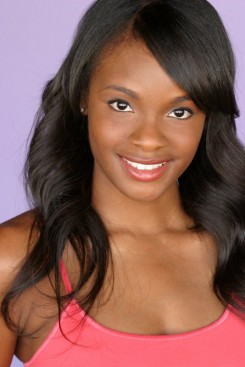 Sharon Pierre-Louis is an Haitian American actress. She is best known for co-starring as Nisha Randall on the ABC Family series The Lying Game.

Pierre-Louis was born and raised in Florida to Haitian parents. Her parents had immigrated to the United States during the 1980s and she was their first child born in the states.[2]She has five other siblings, three of which were born in Haiti, also including an older brother who is Deaf.[2] She became interested in acting in the 6th grade later attending a performing arts middle/high school.

Her first major acting role was in Little Miss CEO (2008), which was a television pilot that was not picked up to series. In 2008, she had a three-episode stint as Stacy Kingston, a lesbian character in the ABC Family drama Lincoln Heights. In 2009, she guest starred in an episode of CSI: Miami, had a small role in the film Fame and appeared in the short film Eckford.

In 2011, She was cast as Nisha Randall on the ABC Family series The Lying Game.[1]

In 2012, She was cast as Little Jody in the Quentin Tarrantino film Django Unchained.

Pierre-Louis is a trained opera singer and is fluent in Haitian Creole and American Sign Language.