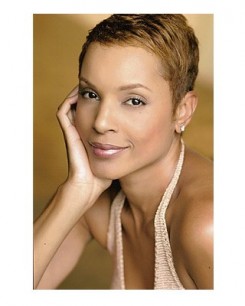 She had guest appearances in Soul Food, CSI: Miami and ER, and a small recurring role in First Monday (2002).

Sandra Prosper developed her lifelong obsession with food while trailing her Grandmother Simone, a legendary caterer in her native country of Haiti, as she prepared the family meals. Sandra watched in fascination as her Grandmother lovingly hovered over fragrant pots of food, stirring and carefully adding a dash of herbs with a touch of spices, until each dish was perfectly completed. Her Grandmother Simone’s dishes were never quick fixes. Despite her impatience, Sandra was often reminded of how each dish needed to cook slowly in order to achieve superior flavor. Dinnertime could never come soon enough; yet it was always worth the wait. Every dish had a unique, complex flavor that only loving care and patience could produce. Dinners at Grandmother Simone’s house always left Sandra and her family begging for more. Grandmother Simone’s uncompromising standard for taste and quality left as deep of an imprint on her then as it does today.

Sandra continued to broaden her appreciation of food as an adult, while circling the globe as a buyer for the premier luxury retailer, Bergdorf Goodman, and later as a model and actress in a variety of successful campaigns and productions including Revlon, and Clinique, “Like Mike,” “ER”, and “Charmed”. Eating foods from the world’s finest restaurants and local finds, Sandra’s taste soon expanded beyond the borders of her homeland to encompass a variety of inspirations. She began incorporating new flavors with old ones, fusing them together, but never forgetting her Caribbean roots. Foods with spice and kick are at the cornerstone of Sandra’s cooking heritage, as indispensable as Haitian folk music and white, sandy beaches. The infusion of her richly textured heritage can be experienced throughout Sandra’s meals.

While routinely preparing dinners to impress her family and friends, Sandra began to receive overwhelming requests for two things-- her fabulous soups and sweets. It didn’t matter whether she had made a veggie puree or chicken noodle soup. Family and friends gushed at how impossible it was to find an assortment of their favorite soups in LA that didn’t contain additives such as flour or dairy. Sandra’s soups contained organic, farm fresh, and dairy-free ingredients, lovingly made to taste exactly the way that they should— like a great bowl of homemade soup. And her organically made desserts had everyone hyperventilating. At first Sandra thought nothing of giving her soups and desserts away to anyone who asked, but she soon realized that perhaps she could turn the need for delicious, homemade soups and sweets into a business.

In 2011, Sandra decided to combine her culinary passion for cooking and eating to create a wholesale and retail business, “Sandra’s Soups and Sweets.” Hearty soups created to comfort and satisfy any appetite for big bold flavors, without compromising quality or purity. Fans of her chicken noodle soup are convinced that it’s the best that they’ve ever tasted! And her desserts—from her peach cake with cinnamon topping, or spiced pumpkin cake with brown butter frosting, are mouthwatering treats too good to resist.

While not writing her weekly food and lifestyle blog, or penning her first cookbook on Pan Caribbean Cuisine, Sandra also runs her charitable social club, THE SUPPER GIRLS, an organization consisting of some of Hollywood’s most powerful minority women, who come together to cook for a cause.