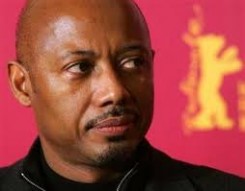 Raoul Peck (born 1953, Port-au-Prince, Haiti) is an award-winning Haitian filmmaker, of both documentary and feature films, and apolitical activist. Briefly, from March 1996 to September 1997, he was Haiti's Minister of Culture.

At age 8, the Haitan-born Peck and his family (he has two younger brothers) fled the Duvalier dictatorship and joined his father inLéopoldville, Democratic Republic of the Congo. His father, Hebert B. Peck, an agronomist, worked for the United Nations FAO andUnesco and had taken a job there as professor of agriculture along with many Haitian professionals invited by the government to fill positions recently vacated by the departing Belgians. His mother, Giselle, would serve as aide and secretary to mayors of Léopoldville for many years. The family resided in DRC for the next 24 years.

Peck attended schools in the DRC (Léopoldville), in the United States (Brooklyn), and in France (Orléans), where he earned a baccalaureate, before studying industrial engineering and economics at Berlin's Humboldt University. He spent a year as a New York City taxi driver and worked (1980–85) as a journalist and photographer before attending and receiving a film degree (1988) from the German Film and Television Academy Berlin (DFFB) in West Berlin.

In 1986 Peck created the film producing company Velvet Film in Germany, which then produced or co-produced all his documentaries, feature films and TV dramas.

Peck initially developed short experimental works and socio-political documentaries, before moving on to feature films. His feature L’Homme sur les quais (1993; The Man by the Shore) was the first Haitian film to be released in theatres in the United States. It was also selected for competition at the 1993 Cannes Film Festival.

Peck served as Minister of Culture in the Haitan government of Prime Minister Rosny Smarth (1996–97), ultimately resigning his post along with the PM. He detailed his experiences in this position in a book, Monsieur le Ministre… jusqu'au bout de la patience.

Peck has achieved his highest degree of international public attention for Lumumba, his 2000 feature film about Prime Minister Patrice Lumumba and the period around the independence of the Belgian Congo in June 1960.

A book of screenplays and images from four of Peck's major features and documentary films, called Stolen Images, is being published in February 2012 by Seven Stories Press.

In 2012, he was named as a member of the Jury for the Main Competition at the 2012 Cannes Film Festival.