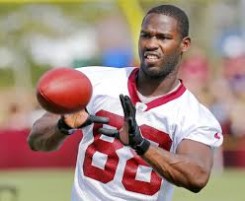 Pierre Andre Garçon ( born August 8, 1986) is an American football wide receiver who plays for theWashington Redskins of the National Football League (NFL). He was drafted by the Indianapolis Colts in the sixth round of the 2008 NFL Draft. He played college football at Mount Union College.

Pierre Garçon is of Haitian descent.Garçon attended John I. Leonard High School in Greenacres, Florida.He earned two varsity letters in football. He also played soccer,playing for travel teams competing across the state and across the country. He was also known for his backflip after scoring goals.

During his time at Mount Union, he was teammates with fellow wide receiver, Cecil Shorts III.

Garçon was drafted by the Indianapolis Colts in the sixth round of the 2008 NFL Draft with the 205th overall pick. In Week 2 against the Minnesota Vikings, he made his NFL debut. Later in Week 10 against the Pittsburgh Steelers, he recorded his first reception. Garçon spent his rookie season as a backup receiver recording only four catches for 23 yards.

By the start of the 2009 season, Garçon was made Reggie Wayne's back-up. After Anthony Gonzalez was injured in the first game of the season, he took his place in the starting lineup. In Week 2 against the Miami Dolphins, he had his first start and recorded his first touchdown. He continued to be a starter until a hand injury caused him to miss the last two games of the season. He displayed himself as a deep threat in Peyton Manning's offense, recording 47 receptions, 765 yards, and four touchdowns in his second season.

In the 2010, Garçon had the starting spot most of the season with the exception for Week 3 and 4, where he was inactive for both games. In Week 6 against the Washington Redskins, he made an impressive one-handed catch. By the end of the season, he had 67 receptions for 784 yards and six touchdowns.

Despite Peyton Manning being out the entire 2011 season due to injury, Garçon had his best season with the Colts. He started in all 16 games of the season and recorded 70 receptions, 947 receiving yards, and six touchdowns.