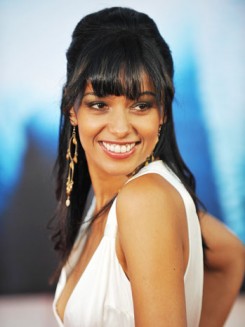 Meta Golding is a Haitian-American actress. Golding was raised in several countries. Besides the United States, Golding also lived in India, Haiti, France and Italy. During her years in Italy, she competed on ice as an Italian national figure skater, but when an injury ended her skating career she started acting in Italian theatre. She returned to the U.S to attend Cornell University and earned degrees in Theatre Arts and International Relations. She currently resides in Los Angeles, California. Golding is fluent in English,French, and Italian.[citation needed] She played District 2 tribute Enobaria in the second film of the Hunger Games trilogy, The Hunger Games: Catching Fire.