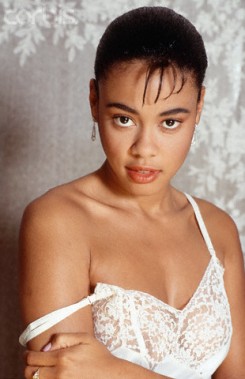 Lela Rochon Staples professionally known as Lela Rochon (born April 17, 1964) is an American actress who is best known for her role as Robin Stokes in the movie Waiting to Exhale.[1]

In 1996, Lela was chosen by People (USA) magazine as one of the "50 most beautiful people in the world".

Rochon was born in Los Angeles, California, the daughter of Zelma, a nurse practitioner, and Samuel Staples, a business owner and graphic artist, who are both of Haitian descent.[2][3] She graduated Cerritos High School in Cerritos, California. She attendedCalifornia State University, Dominguez Hills where she earned a BA in Broadcast Journalism, with minors in Sociology and Theatre.

From 1986–1988, while attending college, Rochon was one of the "Spudettes" featured in over 30 national spots for the Spuds Mckenzie Budweiser/Bud Light TV commercials. She also appeared in the 1985 TV film, A Bunny's Tale (starring Kirstie Alley andDelta Burke) based on Gloria Steinem's experiences as a Playboy Bunny; and appeared as the love interest of Gerald Levert in the video for "My Forever Love" by Levert,[4] and in Luther Vandross's "It's Over Now" video. She also appeared in the music video for Lionel Richie's single "All Night Long (All Night)" as well as in Al B. Sure's video for the song, "Natalie".[5] She had many small roles in television programs, making her film debut in 1985, when she starred opposite Fred Williamson in "Fox Trap". In 1987, she played the role of 'Debby' in the film, "The Wild Pair", starring Beau Bridges and Bubba Smith. In 1989, Rochon acted opposite Eddie Murphy in 1989's Harlem Nights, as the memorable "Sunshine" character. She again worked with Murphy in the successful 1992 romantic comedy, Boomerang. Rochon starred for the first season of The Wayans Bros. television series. Her biggest break came in 1995, when she landed one of the lead roles in the adaptation of the Terry McMillan novel and highly successful film, Waiting to Exhale, in which she played the character "Robin", for which she was nominated for an MTV Movie Award, for "Best Breakthrough Performance". In 1996, Rochon starred opposite Timothy Hutton in the Showtime cable network film, Mr. and Mrs. Loving, receiving a Cable Ace Award nomination for Best Actress. Subsequent films include Any Given Sunday, The Chamber, Gang Related with Tupac Shakur and Jim Belushi, and Why Do Fools Fall in Love, Knock Off, and The Big Hit, as love interest to Mark Wahlberg's leading character. In 2004, Rochon starred in First Daughter with Katie Holmes, and Brooklyn's Finest in 2009. She also had a role in the TV series, "The Division", in 2001.