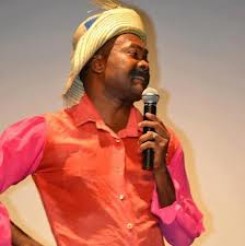 Fernel "Jesifra" Valcourt is a Haitian-comedian legend. Born in Cap-Haitien, he began training in the performing arts at an early age, and recognition for his theatre work catapulted him to national prominence soon. He has been so revered for his natural talents, Tonton Bicha regards him as a motivating force that drove him to seek a career in comedy.

Valcourt's humor strikes a universal chord, and has made him a celebrated figure among the Haitian Diaspora and younger people as well. His comedy is slapstick-based, and he engages in sly risqué jokes that have audiences laughing knowingly. He uses his stage persona, Jesifra, to delight and take jabs at authority figures like President Martelly. His trademark sound bites have the audience laughing before he even gets to the punchline.

Valcourt--in addition to his comedic gifts--playwrights and directs. His critically-acclaimed plays include "The Donkey is Exhausted", "Love Knows No Boundaries", and "The Hick has Thrown in the Towel", all comedy classics. As an actor, he starred in his first film "Breaking Hell", winning him the adoration of the Diaspora.

Capitalizing on Valcourt's fame, a hoax was perpetrated on his fan base in 2009. The false story he had passed away traveled quickly by word-of-mouth. Distraught fans called radio stations all over Haiti to express condolences and praise his legacy. But a video surfaced with Valcourt refuting the lies regarding his demise. He promised-- through God's grace-- he would continue to entertain audiences with his brand of ribald humor.