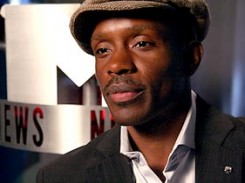 Jean-Claude La Marre is an American writer, director, and film and television actor. His film credits include Malcolm X, Dead presidents, Gang of Roses[1] and Go For Broke. On television, he has guest-starred on New York Undercover, Law & Order, andNYPD Blue.

La Marre's Color of the Cross, is a film that portrays Jesus Christ as a black man, and implies that Christ's persecution was a racially motivated hate crime.[4]

In 2007, LaMarre set up a distribution output deal for his film label, Nulite Media Group. Among the films released through the label are the revisionist western, Gang of Roses, Trapped: Haitian Nights, Broom Wedding, and Nora's Hair Salon, with a cameo byWhitney Houston in the film. LaMarre also directed David Carradine in his final American made film, Brothers in Arms for Sony.