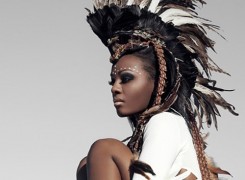 Dawn Angeliqué Richard, known professionally as Dawn Richard (born August 5, 1983), is an American singer-songwriter. Richard started her career after auditioning for Making the Band 3 in 2004, During this time Richard became a member of American girl band Danity Kane, from 2005 to 2009, and reformed the group with 2 of the original 4 members in late 2013. In 2010 Richard joined Diddy-Dirty Money with label head Sean "Diddy" Combs and Kalenna Harper until they disbanded in 2012.[1]

In 2011, following her departure from Bad Boy Records, Richard launched her solo career. The album Goldenheart was released on January 15, 2013, by Our Dawn Entertainment; it received universal acclaim from music critics

Richard is of Louisiana Creole and Haitian descent and was born in New Orleans, Louisiana with one brother. She is currently living in Baltimore, Maryland due to being displaced after Hurricane Katrina. Music has played an influential part in her life since early childhood. Her father is Frank Richard, former lead singer and percussionist of the popular Funk/Soul band Chocolate Milk. Her mother owned a dancing school where Dawn spent much of her childhood developing her skills at choreography and singing.

Early on in her teenage life, Richard began performing with a local New Orleans group called "Realiti". Discovered as a solo artist by Kemic A. Smothers at a 2004 live performance at Tipitina's Uptown in New Orleans, Richard was soon signed under the name "Dawn Angelique" to an exclusive recording contract/development deal with Octarve Anderson, Jr. and his Atlanta independent record label, Yeah! Brother Records. Recording in Los Angeles, Atlanta and New Orleans, Richard and Yeah! Brother records, along with platinum awarded production team The NexMen, Rochad Holiday and Curtis "Sauce" Wilson, crafted a stellar studio solo album called "Been a While", featuring the single "So What" which was co-produced by NeYo. Yeah! Brother Records and its New Orleans management company, Scratch Entertainment, headed by Kemic A. Smothers, Esq., agreed after negotiations with Sean "Diddy" Combs of Bad Boy Records, to postpone release of the album while arranging an immediate release from her exclusive recording contract with Yeah! Brother Records. Although it had no releases and did not chart, the studio album "Been A While" was still good enough to secure her a spot as the opening act forAnthony Hamilton in Tallahassee, Florida. During the recording of "Been A While", she focused on touring and live performances, dance, and becoming an NBA cheerleader for the New Orleans Hornets while attending the University of New Orleans

Richard on the set of a 2006 Danity Kane music video

Richard's "big break" came in 2005 when she auditioned for the MTV show Making the Band 3 in Orlando, where she was chosen to compete for a spot in Combs's future girl group. After the negotiated release from her contract with Yeah! Brother Records, she elevated her career by signing with Bad Boy Worldwide Entertainment. She beat out numerous contestants to secure herself a spot, along with Aubrey O'Day, Aundrea Fimbres, Wanita Woodgett(now known as "D. Woods"), and Shannon Bex.

The newly formed group became Danity Kane. The idea for the name of the group came from one of Richard's drawings. An avid fan of manga, while Danity Kane was in the studio, Richard drew a female superhero which caught the attention of Combs. When asked what the character's name was, she replied, "Danity Kane". To Combs, this represented the girls of Making the Band 3. He then decided that it should be the name of the group. The name and story were first introduced during Danity Kane's Total Request Live appearance on June 14, 2006.

Richard performing on stage during a 2006 Danity Kane concert

Richard has also remixed a song with London-based artist Cherri V, titled "Fast Car". The song has since become one of the most listened to songs on Cherri V's MySpace.[citation needed] Early in 2008, a song called "Phase" was leaked onto the Internet and featured Lil Wayne. Although it was buzzed as a Danity Kane track, only Richard's voice was featured on the song, which left speculation that it was a solo demo. In July 2008, two new tracks were released onto the internet, one called "Rush Love" which featured Flo Rida, and another track called "Strobe Light" (written by Mary Brown and produced by Chad Beatz (Tastemaker Music).[3] It is still unknown if this was part of a future solo endeavor. During a MTV News break, it was stated that Richard was working on an untitled comic book. Richard also stated in an interview that she would be releasing a soundtrack for the Danity Kane comic book, to be released in March 2009. Included would be the leaked track "Falls Away". On January 27, 2009, Richard confirmed to MTV News in an interview that Danity Kane had completely split up.[4] In that same interview, she stated that she still considered herself a member of Danity Kane (along with Aundrea Fimbres), and still had hopes that each girl would be willing to work as a group again.[5] On the April 16, 2009, episode of Making the Band, Combs revealed that he released O'Day and Woods, along with Bex, from their contracts, and would be releasing Fimbres as well. He told Richard that she will stay on the label and that if there are any future plans for a new Danity Kane, she will be the only returning member.[6] However, on the April 23, 2009 finale of the series, Combs stated that all five original members would be returning if he ever decides to reunite the group.

In 2009, Richard began working with Bad Boy Records, writing for artist Cassie and Combs himself. Soon after Danity Kane's breakup, Richard was featured in a commercial on the opposition of California's Prop 8. Richard became a member of the Diddy-Dirty Money collective, which includes Combs and singer/songwriterKalenna Harper. She featured in Keri Hilson's video for "The Way You Love Me" as "Money". She is the first member of Danity Kane to have released professional music under a major label after their split, with the Dirty Money album.

During 2010, Richard started working heavily on putting the finishing touches on her mixtape, The Prelude to A Tell Tale Heart. Before full mix-tape release Dawn has released a few songs, one of them being "Me Myself & Y" which she released as a promotional single on globalgrind.com.[8] Other are "These Tears", a heavy ballad, and "Let Love In", another ballad with heavy vocal harmonies.[9] The Mix-tape The Prelude to A Tell Tale Heart or alternate title: #ATellTaleHeart[10][11][12] was released February 7, 2011 on her official web-site. There are 15 tracks.[11][13] It called "the prelude to..." because there will be official debut studio album by Dawn Richard entitled A-Tell Tale Heart, which she is working on for past 3 years.[14] She worked with Trendsetter (the producer) on a few tracks for that album.[15][16] Celebrating the release of her mix-tape, Dawn Richard organized several club events. On February 7, 2011 at "Milan" club in Baltimore[17][18] and on February 12, 2011 at PHX – "Nightclub MIXTAPE PARTY RELEASE".[19] On June 19, 2011 a buzz track entitled "Stuck on Mad" was released to the public. Followed by a release of a remix to Frank Ocean's "Novacane". The remix which was co-written by songwriter Intyce, hit the net on June 21, 2011 and reached over 5,000 downloads within a few hours.[20]

Dawn released the visual for her first promotional single "SMFU (Save Me From U)" on 106 & Park in January 2012. Other promotional singles such as "Fly, Change, and Black Lipstick" came after. She quickly followed with a leading single titled "Bombs". The video was often compared to Beyonce's "Run The World (Girls)" and Nicki Minaj's "Massive Attack". The video shows heavy choreography in a desert. After the success of "Bombs", Richard's next official single from Armor On was released: "Automatic", the most urban record from the EP. The video was released June 18 and premiered on 106 & Park. The following music video was filmed in July 2012. Richard released three video trailers to YouTube for her singles "Faith" as well as "Wild N'Young" which were meshed into one music video released on August 29, 2012 as the final release from Armor On. Richard announced that her major solo debut project will be a trilogy of albums entitled Goldenheart'', BlackHeart, and RedemptionHeart. GoldenHeart, the first of the trilogy, was expected to be released October 16, 2012.[21] "SMFU (Save Me from U)" was released on the internet October 31, 2011 and is set to be on the first album. The video was premiered on 106 & Park on January 5, 2012.[22] Druski is the main producer on this entire project. The sound that Dawn is going for is a progressive R&B sound.

In celebration of her one million Twitter followers, Richard introduced the set-up for her album GoldenHeart on July 17, 2012 with a record entitled "Pretty Wicked Things". "It's the story of the beautiful things in life that get ruined by the wicked," explains Dawn, produced and co-written by Armor On collaborator Druski, the track is available on iTunes. "Goldenheart's" was released on January 15, 2013 both in stores and through online retailers. Originally intended for release in October 2012, Richard delayed Goldenheart's release after signing a distribution deal with independent company Altavoz Distribution, which would release physical copies to retailers,[24] and provide a wider marketing reach.[25] The album's lead single,[26]"'86", was released as a digital download on September 26.[27]

Goldenheart was released in the United States on January 15, 2013.[28] Richard released the album independently, as she felt record labels were "taking a bit longer than we want".[24] It sold 3,000 copies in its first week and debuted at number 137 on the Billboard 200, number 2 on the Top Heatseekers Albums,[29] and number 68 on the Top R&B/Hip-Hop Albums.[30] The album also reached the top of the iTunes Store's R&B chart, which prompted music retailer f.y.e. to preemptively release its physicalCD.[29]'Goldenheart received universal acclaim from music critics, who hailed Richard as one of the best new acts in pop and R&B.[31]

Dawn has been working on a Danity Kane reunion. "You know we've just grown. We're more mature women," Aubrey O'Day told MTV News on the VMA red carpet. "This time we wanted to come back on our own free will and mostly the music, we love making music. We're in the studio right now [and] actually with Stereotypes, who did 'Damaged.' And we have a new song that we love called 'Rage.' So we're really excited about that." O'Day and Richard were joined by Shannon Bex and Aundrea Fimbres, but D. Woods did not participate in the reunion.

Dawn was scheduled to release the second installment in her album trilogy, BlackHeart in October 2013, but announced that the album will be released after the Danity Kane project. The third and final installment, RedemptionHeart will follow and is to be released in 2014. On New Year's Day of 2014, Dawn's long awaited music video for Riot/Northern Lights was leaked online. The video was originally shelved back in May 2013 after her and producer Drew parted ways for unknown reasons. The video has received positive reviews as it continues where the "86" music video left off.