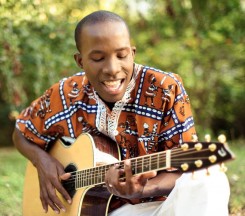 Bélo (born 29 October 1979, Port-au-Prince, Haiti) is the stage name of Jean Bélony Murat, who is a famous Haitian interpreter, composer and guitarist. His first album Lakou trankil(Quiet Streets) is treasured by Haitians because the songs explain and reflect the problems the country faces. Bélo is popular in Europe and Africa where he won the Discovery RFI Prime in April 2006. This award had already helped other artists like Tiken Jah Fakoly and Rokia Traoré to reveal their talent in the music industry. Bélo's musical approach is influenced by other Caribbean styles but mostly by jazz and reggae.

Jean Bélony Murat was born on October 29, 1979, at Croix des Bouquet in the north of Port-au-Prince, the capital of Haiti. He grew up at Pétionville an area where music has an important role in the Haitian community. He started to sing at a very young age and at 11 years old interpreted Buju Banton, his idol. In 1994, he and his friend formed the Mega Boys which was not very successful. In 1997, he met Fabrice Rouzier and San, two artists who discovered his talent and encouraged him to play an instrument. At first, he chose the bass but changed later to the guitar. He knew that music could not be his only occupation if he was to please his supporters. He went to university in 2001 where he studied accounting for four years. Then he was ready to devote his life to music and released his first album in 2005.

After Lakou trankil, the first album which had a lot of success locally and internationally, Bélo released Reference. This is also close to reggae and has a touch of pop and jazz. He exposed the social problems of humankind, such as violence, AIDS and homeless children. In other words, Bélo is an ambassador of the Haitian music; he shows love and affection for his homeland. In his songs he is making society aware of its problems and is proposing solutions.