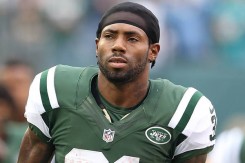 Antonio Cromartie (born April 15, 1984) is an American football cornerback for the Arizona Cardinals of the National Football League (NFL). He played college football for Florida State University (FSU). He was drafted by the San Diego Chargers 19th overall in the 2006 NFL Draft. He has also played for the New York Jets. Cromartie is credited with the longest play in NFL history, returning a missed Ryan Longwell field goal 109 yards for a touchdown on November 4, 2007.

Cromartie was born in Tallahassee, Florida to Haitian American parents.[2][3] He was a versatile player at Tallahassee'sLincoln High School. Throughout his senior season, Cromartie recorded 12 tackles and 2 interceptions, returned 3 punts and 2 kicks for TDs, had 450 yards and 1 touchdown on 30 catches and ran the ball 13 times for 242 yards and 3 touchdowns. This was enough to earn Cromartie 2002 USA Today defensive player of the year.[4] Considered a four-star recruit byRivals.com, Cromartie ranked sixth among cornerback prospects in the nation.[5] Cromartie also participated in the 2003 U.S. Army All-American Bowl.

Cromartie was also a standout in track and placed 3rd in the 110m hurdles and as a member of the 4x100 m relay team at the Class 5A County track meet.

Cromartie decided to stay close to home for college and accepted an athletic scholarship offer from Florida State University, where he played for coach Bobby Bowden's Florida State Seminoles football team from 2003 to 2004. After flashing playmaking potential as a nickelback and kick returner his first two years, Cromartie tore the anterior cruciate ligament in his left knee in July, 2005 during voluntary workouts before his junior year and was forced to miss the entire 2005 season. He was potentially going to play at wide receiver during his junior year.

Cromartie was also a track star at Tallahassee (FL) Lincoln. He was a standout in the 110-meter hurdles, posting a personal best of 14.10 seconds. He was also a member of the 4 x 100 m relay team.

Despite being removed from competitive football for an entire year, Cromartie was still selected as the 19th overall pick of the first round of the 2006 NFL Draft by the Chargers based on his great potential.

After not performing much at the NFL Scouting Combine, on March 16, 2006, just 8 months after surgery to repair his torn ACL, Cromartie performed at his pro day in 2006 for scouts.

On July 25, 2006, Cromartie signed a 5-year, $13.5 million contract with $7.35 million guaranteed with the Chargers. In his first season with the Chargers, Cromartie saw action at cornerback and on special teams. Toward the end of the season, Cromartie handled some punt and kickoff return duties. In a game against the Oakland Raiders, Cromartie returned a kickoff 91 yards, the longest return for the team since 2001.

Cromartie wore jersey #25 his rookie season but switched to #31 as a Charger for subsequent years, the reverse of #13, the jersey he wore at Florida State.

On October 28, 2007, Cromartie had two interceptions, returning one 70 yards for a touchdown, 91 total interception return yards, and a fumble recovery for another touchdown while leading the Chargers to a 35-10 victory against the Houston Texans. He was subsequently nominated for the AFC Defensive Player of the Week award.

The following week, Cromartie made NFL history. Minnesota Vikings kicker Ryan Longwell came onto the field to attempt a 58-yard field goal to end the first half. The Chargers put Cromartie in the endzone to return the field goal in case of a missed kick. The field goal attempt missed the goalposts and fell toward the back of the endzone. Cromartie intercepted the football, came down with both feet in bounds, two inches from the back of the end zone, and began the return. Cromartie returned the missed field goal 109 yards for a touchdown at The Metrodome, setting a record for the longest play in NFL history. This record can be equaled but never exceeded (barring a rule change); a regulation football field is 100 yards long, the end zones are 10 yards deep, a play ends when the ball crosses the goal line, and all plays are rounded down to the nearest yard. Therefore, according to the current rules of the game, 109 is the theoretical maximum for plays in the NFL.

The next week Cromartie made his first NFL start in place of the injured Quentin Jammer and intercepted three passes thrown by Peyton Manning of the Indianapolis Colts; the last of which was a leaping one-handed interception in front of Colts WR Reggie Wayne.[9] Cromartie called the interception the best play of his short career.[10] He is the first player to intercept Peyton Manning three times in one game during the regular season, and earned Defensive Player of the Week honors for his performance in the game.[11]

On November 24, Cromartie became the starting cornerback, replacing Drayton Florence (who became a free agent at the end of the season). In the AFC Divisional game against the Colts, Cromartie recorded another interception against Peyton Manning, and his defensive efforts during the game (including a forced fumble against Marvin Harrison) helped the Chargers knock off the defending champion Colts.

Cromartie was one of three cornerbacks selected to the 2007 AFC Pro Bowl team, his first selection. At the Pro Bowl, Cromartie intercepted two passes.

Cromartie was not as successful in 2008, his third season. After stating before the season began that he'd like to break the all-time interception record in a season (14), he managed only 2 interceptions for the season. At the end of the season, Cromartie announced that he played the entire season with a broken hip. The injury was sustained in the first week of the season against the Carolina Panthers.

He finished the 2009 regular season with 3 interceptions, 33 tackles, and 10 passes defended.

Cromartie was traded to the New York Jets on March 4, 2010 for a third-round draft pick in the 2011 NFL Draft that turned into a second-round pick based on Cromartie's performance.[12] In his first regular season game with the Jets, Cromartie intercepted an errant throw from Joe Flacco which he returned 66 yards.[13] Cromartie performed well but was inconsistent through the season. He finished the regular season with 3 interceptions and broke up 18 passes however he gave up 7 touchdowns.[14] His kickoff return in the wild card round against the Indianapolis Colts helped to set up Nick Folk's game winning field goal.[15]

The Jets re-signed Cromartie to a four-year, $32 million contract on August 1, 2011.[14] In the home opener against the Dallas Cowboys on September 11, Cromartie gave up two touchdowns to Dez Bryant and Miles Austin but rebounded the following week intercepting two passes by Luke McCown.[16] Cromartie was named the AFC Defensive Player of the Week for his performance against the Jaguars.[17] In Week 3 against the Oakland Raiders, Cromartie committed four errant penalties for 46 total yards. He later fumbled a kickoff return which resulted in a turnover that led to a Raiders go-ahead touchdown. He left the game in the second half and was transported to Eden Medical Center where he was diagnosed with bruised ribs and a pulmonary contusion.[18]

During the 2012 season, after Darrelle Revis went down due to a torn ACL, Cromartie became the #1 cornerback and performed well, finishing the year with 3 interceptions, 13 passes defended, and 30 tackles in all 16 games started. For his efforts, Cromartie was elected to attend the Pro Bowl for the 2nd time of his career.

After the 2013 season, Cromartie was elected to attend the Pro Bowl as a replacement. It was his 3rd election of his career.