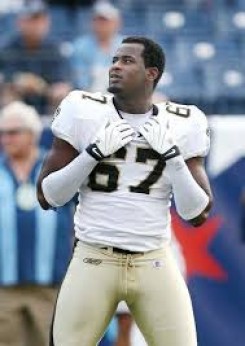 Junior Jovais Galette (born March 27, 1988) is an American football linebacker for the New Orleans Saints of the National Football League.[1] He was signed as an undrafted free agent by the Saints in 2010. He played college football at Temple University and Stillman College.

Born in Port-au-Prince, Haiti, Galette graduated from Saint Joseph Regional High School in Montvale, New Jersey in 2006, then attended Temple University, where he played for three seasons. He received honorable mention on the 2006 Sporting News Freshman All-American team as a linebacker. He switched to defensive end for his next two years. After being suspended from the team during his junior year, he transferred to Division II Stillman College in Tuscaloosa, Alabama for his final season, where he was named to the all-SIAC first team.

Galette was not drafted in the 2010 draft. He signed with the Saints as a free agent. His energetic play made him a fan favorite during the preseason, and after he blocked a punt and registered a sack in the Saints' final preseason game, Galette was selected for the Saints' 53-man regular season roster. In the 2013 season, he became the team's a regular starter at outside linebacker under new defensive coordinatorRob Ryan.