Vegas Is Going To Be Lit This Weekend for @KonpaInVegas

Konpa In Vegas 2016! Haitian music is coming to the state of Nevada. Presented by the VIP Experience Group, a music promotions and event company, the multi-day affair is set to begin on Thursday June 23rd, and concludes on the 27th. 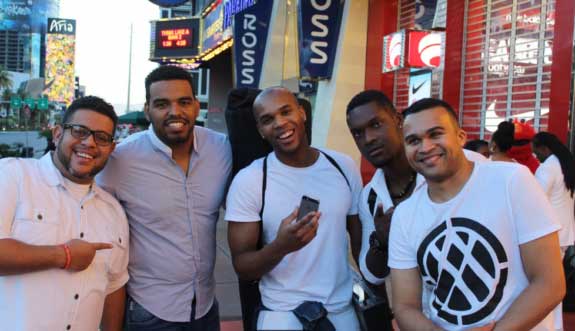 Above: Members of Haitian bands Carimi, Enposib, and Harmonik pose on the strip during a past edition of Konpa In Vegas.

The show is set to be hosted by Haiti-based, multimedia personality Carel Pedre, and will feature a highly-anticipated performance by the band Sweet Mickey, headed by former Haiti president Michel Martelly. Other performers scheduled include Rutshelle, a songstress based in Haiti, as well as JPerry, also based on the island. Comedian Kako will be joining Carel Pedre with hosting duties. Initial flyers for the event indicated that Haitian-American Productions, featuring comedians Haitian Husbands, Plus Daddy and Success Jr, were going to be performing, but the comedians announced on their page that they would not be there this year.

Half-a-dozen deejays will take the stage and rock the life out of the hundreds expected for the event: DJ Jeanuwine, DJ Rock, DJ Stakz, DJ Ok, DJ Roger, DJ Dynamic and DJ Groove. Among the bands performing: Carimi, T-Vice, 5Lan, Harmonik and Karizma.

Above: Konpa In Vegas partygoers at last year’s event.

The organizers, headed by founder Nathan Fragelus, put on the event every summer, drawing hundreds of Haitian-Americans who are eager to have a taste of Haitian music in an exciting city. This is the fourth edition of the event. This year VIP Experience Group has even emerged with a free app that attendees can download to keep up with the schedule and performances.

Will you be going dear Kreyolicious readers?

[All photos via Konpa In Vegas]