The National Network for the Defense of Human Rights ( 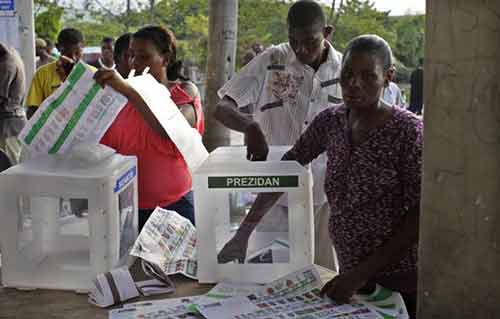 , women’s rights and civil society advocacy, began releasing their reports on the elections of October 25, 2015, and have cited massive electoral fraud.

The National Network for the Defense of Human Rights (RNDDH), the Solidarity of Haitian Women (SOFA), the National Council of Haitian Non-State Actors (CONHANE) and CNO, have all welcomed the positive security gains made in this past Sunday’s elections but said systematic fraud led the day’s events.

The availability of electoral lists 30 days in advance, the identification of polling stations, the distribution of accreditation cards, the availability of election materials to polling centers, and the engagement of Haitian National Police in security were listed, among others, the positive aspects of the voting.

“Contrary to August 9, there was an effort by the Provisional Electoral Council to prepare the voting day,” said Marie Frantz Joachim of SOFA.

“If the CEP is shown applied in the planning of the returning 25 October 2015, the Coalition believes, however, that some messages have not been properly conveyed or assimilated by the leaders of the polling centers,” says the coalition in the report presented at a press conference at the headquarters of RNDDH.

“The turnout of around 25%, already low, is even lower due to the rotation of officers – observers voting several times”, said Gideon Jean who presented things to deplore during Sunday’s vote.

If there is one point on which the coalition’s report differs from other observers, it is the question of fraud. RNDDH, CONHANE, NCO and SOFA report numerous cases of fraud during the voting process.

“The ballot stuffing was systematic in several polling centers,” said Marie Yolaine Gilles. “At the time of opening, polling officials and polling centers forced agents of political parties and election observers out of the polling stations,” said the coalition’s report.

According to the preliminary report, the proxy cards and observers were sold to individuals involved in fraud. Some agents have voted several times. The coalition questions the rotation of agents in the polling stations.

Irregularities related to the delay in the opening of polling stations, office layout, non-identification of the CEP staff involved in the process were also discussed in the report of the coalition.

“Polling stations were installed in small spaces, often difficult to access, which in many places has created bungling. Some voters were forced to fulfill their duty as citizens under a blazing sun as some offices were installed in a yard or in a garden. ”

For the rest of the process, these civil society organizations made a series of recommendations to the Provisional Electoral Council.

Among other recommendations, the coalition asked the CEP to share the operating protocol of the tabulation center, particularly with respect to the processing of cases and the method of recruitment of lawyers / auditors who treat the minutes at Tabulation Center.

Communication procedures and reasons for quarantine should be in the minutes. To clearly explain the fate of the white vote since on the ballot there is “no candidate”, whereas it does not appear in the vote tally sheet.