PORT-AU-PRINCE, Haiti (sentinel.ht) – Thursday, January 28, 2016, a few hours after the Washington-based Organization of American States (OAS) agreed to his request to send a mission to observe his mandate-ending talks, President Michel Martelly appeared in public to announce he hadn’t the intention of leaving the presidency without an elected president to replace him.

The declaration of Martelly, made at the inauguration of the new Jeremie Wharf, was received as a declaration of war by an overwhelming number of sectors and citizens in Haiti who have since responded with reproach.

Michel Martelly said “I am not going to handover power to a bunch of people who were against the elections.” Martelly said an elected should be replaced by an elected. He also invoked Article 136 of the Constitution of Haiti regarding the President of the Republic’s duty to ensure the proper functioning of the State’s institutions.

Among the reproaches to Martelly’s declaration were recollections of his position during the end of mandates for roughly 5,000 elected officials across Haiti during his term. As the president made elections impossible and mandates of local officials and law makers ended, President Martelly ignored the same calls of these statespersons to stay; a method, according to National Palace sources, to grow his authoritarian power.

It was the first time the Haitian Head of State had appeared in public in 6 days, since when the Provisional Electoral Council (CEP) of Pierre Louis Opont cancelled the decried January 24, 2016 presidential runoffs. Since, Martelly and the de facto Prime Minister, Evans Paul, had been absent at many events they were scheduled to appear at.

Present at Wharf Jeremie in Cite Soleil for Martelly’s declarations were members of the “Core Group”, a clique of diplomats in Haiti that include the ambassadors and representatives of the United States, United Nations, Canada, France, Brazil, European Union and OAS.

Deception of Martelly by the international community and CEP 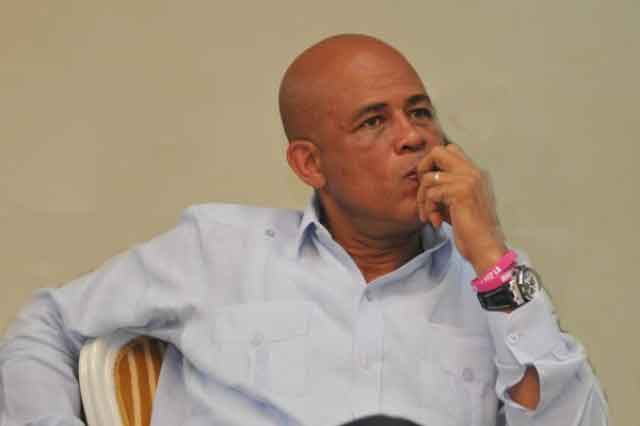 According to sources at the National Palace, the Haitian Head of State and de facto prime minister, Evans Paul, appeared deceived as the United States and United Nations issued a joint press note under the name of their clique, the “Core Group”, which essentially said the Sunday elections were not tenable.

Martelly and Paul were absent from the public eye for several days. Neither issued a response to the Provisional Electoral Council’s (CEP) decision. Neither were present at scheduled events, appearances, inaugurations and speaking engagements, where they were billed to appear.

Even the candidate for the ruling party, Jovenel Moïse, learned of the cancellation from news releases. Parti Haitien Tet Kale (PHTK) of the Martelly regime had continued to spend millions of dollars (alleged to be state funds) to campaign throughout the entire electoral crisis, even as the only candidate running for the seat.

At the moment the embattled CEP President, Pierre Louis Opont, had taken before news cameras to announce the cancellation of the vote, candidate Moïse was said to be in the North, preparing to take to the stage at a campaign-ending rally on that Friday.

Most striking to Martelly and his regime is perhaps the sudden disavowal of the “Core Group”, which is led by the United States’, Obama administration, and comprises diplomats from the United Nations, Brazil, Canada, Spain, European Union (EU) and the Washington-based Organization of American States (OAS).

The Obama administration and OAS had propped up Martelly as president, jettisoning him in to the second round of elections in 2011, although he had not met Constitutional requirements or obtained the votes to qualify for the spot.

Through 5 years Martelly was able to count on the support of this sect of the international community as human rights were violated, corruption reached new heights, and as he brought a democracy of more than 5,000 elected officials to a dictatorship. The “Core Group” had supported in giving the regime a guise of legitimacy and democracy.

It appears this support is no more as February 7, 2016 approaches and the end of Michel Martelly’s term as president. Martelly’s hopes to push though Jovenel Moïse as president through violence, intimidation and widespread fraud is not successful. It is imagined that the regime is total panic mode with one week left.

The post Deception of Martelly by the international community and CEP appeared first on Haiti Sentinel.